LudoNarraCon is the Steam hosted digital convention that strives to celebrate numerous narrative video games. Created and delivered by the Indie label Fellow Traveller, the convention creates a platform to showcase the captivating and unique narrative games. While the convention is digitally based, you’ll still get the true feelings and experiences you would find if you were visiting a physical conference.

This year sees the convention return for its third year and runs from April 23rd to April 26th. With over forty games exhibiting at the convention as well as a host of panels, talks and, Q&A Sessions with community figures and developers that means there’s plenty for everyone to catch during the course of the event. With the event being hosted on Steam it means everything is easily accessible, and you can find the games featured easily and add them to your wish list at the same time. 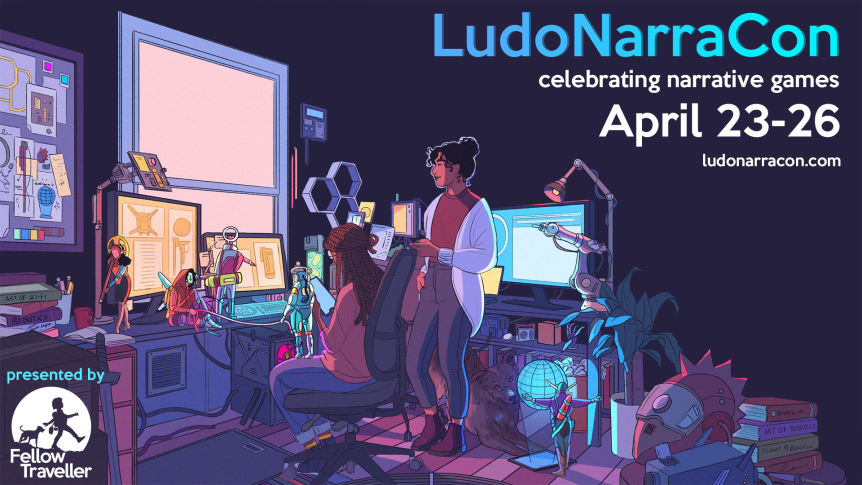 As part of the convention, you are able to purchase the LudoNarraCon Supporter Pack. The pack was especially created for the event and includes a compilation album, numerous wallpapers and the exclusive game Cyrano. The Supporter Pack costs just £5.19 and the money raised through purchases will help LudoNarraCon grow year-on-year.

Cyrano is the work of Kind Words developer Popcannibal and Fellow Traveller commissioned the team to create a new short game specifically for LudoNarraCon this year.

“This one hour adaptation of the classic stage play, Cyrano de Bergerac, invites you to fight with blades and wits. Cyrano is the greatest swordsman and wordsmith in all of France. He also has the largest nose and the fiercest temper. He has stood alone against a hundred soldiers and can best the wits of any poet alive, but when he falls in love with Roxane, he is hopeless. How could she ever love such a ridiculous nose?! – LudoNarraCon 2021“

However, Cyrano is not the only game featuring in this event. With over forty fantastic games there is plenty for everyone. You’ll find the likes of Cozy Grove, Disco Elysium – The Final Cut, Spiritfarer, What Comes After, Haven, NUTS, Tunic and many, many more. All of these games are available to download as a demo or as a full game.

You can find a full list of the exhibitors here.

With so much packed into the next few days, there is plenty to check out. I’m excited to check out many of the game demos that are available as well as catching some of the panels today and Saturday.

Last year I caught the tail end of the event and was surprised that I hadn’t come across the event sooner. This year I made sure to keep checking back to find out more about the event and find out how I could get involved myself.

Over the next few weeks I’ll be sharing a variety of different posts including reviews for the Mind Scanners demo and Forgotten Fields as well as some of my favourite games and highlights from this year’s LudoNarraCon!

You can check out LudoNarraCon over on Steam right now and via updates on the Fellow Traveller’s Twitter throughout the weekend!

One thought on “Welcome to LudoNarraCon 2021”